Very little is information is known about Tsutsumi except that he married to Tomoyo Sakurai and is Tomoki Sakurai's father. He is shown very briefly in the manga. 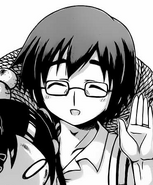 Powerful Karate Chop just like Sohara Chp49
Add a photo to this gallery
Retrieved from "https://soranootoshimono.fandom.com/wiki/Tsutsumi_Sakurai?oldid=17507"
Community content is available under CC-BY-SA unless otherwise noted.