Tomozou Sakurai (桜井 智蔵,, sakurai tomozō?) is Tomoki's equally perverted grandfather, whose dream was to take every woman in the world to bed, but could not do so before his death. He frequently appears during Tomoki's flashbacks and dreams (or any other supernatural phenomena), to give him (albeit perverted) advice, which always seems to help the latter in dire situations.

Tomozou is an elderly man, depicted to be a sort of farmer based upon his clothing. His hair and eyes have never been revealed. He has a very faint mustache, and very noticeable wrinkles under his cheeks. He has a stubby nose, and always seems to be smoking a pipe. Also, Whenever he appears, a particular song plays, (except for the time when he was on the train from "Welcome to "A Story From Tomoki's Fly"). 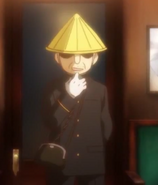 Tomozou outside the hut in Tomoki's dreamworld (Anime)
Add a photo to this gallery
Retrieved from "https://soranootoshimono.fandom.com/wiki/Tomozou_Sakurai?oldid=20286"
Community content is available under CC-BY-SA unless otherwise noted.