Tomoki is exceptionally kind and sincere. He cares for the Angeloids and he wants them to embrace freedom by not being under a master and obeying their orders.

Tomoki has feelings for Ikaros, Nymph, and Sohara. However, he has never violated Ikaros the way he does Nymph, Sohara, and Astraea. When Sohara learns this, she accuses Tomoki of harboring "extremely strong feelings" for Ikaros. He has also "proposed" to and kissed Ikaros in the past. Ikaros is madly in love with him but he had not noticed for a while. He has also over-looked the fact that he is in the center of an extremely tough "love pentagon" including himself, Ikaros, Sohara, Nymph, and Astraea. Later in the series, he was forced to fight Ikaros, one-on-one, to win a female mannequin he wanted so badly. However, to everyone's surprise, Tomoki mans up and confesses to Ikaros that he has deep feelings for her. Tomoki was later surprised at hearing the confessions of the other angeloids and was surprised he didn't notice them.

He tried to break the Angeloids' tendency to obey their master's orders completely by letting them do whatever they want, giving them a great degree of freedom to make their decisions. This did not work for Ikaros, however. The effects of Tomoki's attempt to do so much were more drastic than he had imagined. While he constantly laments that his idealistic world of peace and quiet is ruined by the Angeloids, he admits that he does see them as a family, and enjoys their company.

In Eternal My Master, Tomoki is naive, not understanding Ikaros's feelings such as when he broke the angel imprinting with her. At the time she asked him to be her master once more, he understood that Ikaros has strong feelings for him and that she was afraid of killing anyone. But when Ikaros was burst into flames while taking him to Synapse, he cried and begged her to stop. Once she kissed him and confessed her love for him, he understood her true feelings and her wish to be with him forever. When he arrived at Synapse, he might've also said "Ikaros".

Tomoki appears to be a normal teenager. His most notable features are his black hair with a stray strand and his brown eyes. Normally, he is seen wearing his school uniform and casual clothes at home. He is rather short for his age, and his childhood friend Sohara is taller than him.

He is usually drawn in a "deformed" or "chibi" style in the anime and manga save for serious situations.

Tomoki frequently has mysterious, recurring dreams of meeting an angel that connects the human world and the Synapse. It begins with Tomoki in a field in his school uniform, and next to him appears a blue-haired angel, Daedalus, who later takes off, much to his disappointment. The dream ends when he wakes up by Sohara, his childhood friend, who tries to get him to school on time. Sohara, embarrassed by the scene, gives Tomoki a karate blow to the face, causing him to wake up. Arriving at the school, they are faced with a crowd approaching the school. One of the students informs them that someone is attempting to jump from the top of the building.

They look up to find Eishiro Sugata, the President of New World Discovery Club. After that, they see him  jump, go over all and fall into the nearby forest, arrive and ask teachers for students entering school. There after Tomoki is in the classroom, sleepy, he eats his lunch and falls asleep on the table in the lunch break, he dreams again with the girl she now has the form of an angel and asks him for help saying that the sky was captured, Tomoki just looks worried blankly.

He wakes up crying to find a concerned Sohara, who is worried since he has been having this dream since his childhood. She suggests he visit Eiishiro Sugata but Tomoki is refuses due to Sugata's eccentric nature. He relents when she threatens him with her trademark "karate chop of doom".

In the club room, Sugata claims not to be interested, but shows a map of the earth on the computer screen and asks if Tomoki understands it. Tomoki doesn't and, Sugata gives a nonsensical explanation that Tomoki does not understand. When he tries to run away from there, he is stopped by Sugata saying they should meet at night under the cherry tree.

Tomoki disagrees, but Sohara says that everyone will go but is the only one to show up. Midnight falls, Tomoki sitting under the cherry tree, alone, wondering what he is doing there since  he was the only one who could stay there. While deciding to leave, he gets a call from Sugata asking him to flee there quickly, but he can't tell why because the signal was failing, so he looks up and sees a massive black circular object above the city. Suddenly pieces of rock falling into the hole, which explode in front of him, he looks into the hole and sees a strange creature, wonders if it's a human, and if he should help, but decides not to, since humans do not have wings, so he tries to get away from that place, but then remembers the creature that was inside the hole.

He tries to say it will be fine and he does not want problems and wants to lead a quiet life, but he couldn't and runs toward the hole and withdraws the person who was there. He looks up again and sees a giant rock fall upon them. Suddenly, he finds himself in the air, wondering what had happened. He looks back and saw the person that saved him, Ikaros, who then proceeds to "Imprint" on him.

When Tomoki was young, he always desired to discover the "New World" just like Sugata Eishirou, he even lead his friends to the mountain to see the bird-nest he found. During the journey, some of his friends got wounded and their parents thought Tomoki was a dangerous kid and didn't allow their children to play with him anymore. Lonely and sorrow was Tomoki day by day until Sohara became his neighbor by moving into the house next to his. Alike Tomoki, Sohara didn't have any friends. Having many similarities, Tomoki and Sohara sooner became best friends with each other. Everyday, Sohara comes to Tomoki's house to wake him up and Tomoki was the one who trained Sohara in Karate and planting oranges. They spent their childhood together sharing many difficulties, not only happiness but sorrow. Since unknown to them, Sohara took a big role in Tomoki's life.

Ikaros attempted to kiss Tomoki, and yet she fails. Later as she does house chores as usual, Nymph and Astraea take Tomoki on a date.

As everyone comes home, Tomoki wonders why Ikaros doesn't show emotions and assumes it is because of the imprinting chain. Nymph and Astraea get into a sister fight. Tomoki is getting tired of the troublesome routine and tries to kick them out but they shout his own words back at him that Angeloids are freeloaders. Tomoki then breaks Ikaros' imprinting, with Daedalus and Sohara muttering their dismayed. Tomoki's day becomes even rougher as everyone are condescending him. Mikako takes Ikaros to her household for the time-being as to aggravate Tomoki.

The next day, the girls try to make breakfast for Tomoki however their quality doesn't meet any standard. Then Ikaros crashes in picking up Tomoki in a bold manner saying she won't hand over him to anyone. Lying in the air, Ikaros recklessly drops Tomoki in a restaurant on his command as their date. Proposing they should go somewhere with just the two of them, Ikaros chases after Tomoki begging him to be her master again. Arriving at the sakura tree, Tomoki reminisces anything that happened since he met Ikaros. The others show up lecturing him that he needs to think deeply how Ikaros feels and what she wants. Mikako then "orders" Ikaros to throw Tomoki somewhere high up, as a way of to provoke their grudge from each other.

Screaming out of despair; wondering the purpose she was created for and having no other place to go to, Ikaros tearfully begs Tomoki to be her master as he is all she ever wants. Realizing his foolishness and Ikaros' true feeling he accepts her imprinting on him by grabbing her chocker and returns to everyone happily.

Tomoki is an expert in all things lewd and perverted. He bold and resourceful in his various attempts at harassing women. On one occasion, he led all of the boys in his school in a snowball war against the girls (that Mikako hosted), capturing several of them. In a surprising demonstration of his leadership skills, Tomoki ordered his troops to focus on dangerous girls (Sohara) before anyone else. On another occasion, he dived into a pool and tied up all of the girls in it before any of them could react.

As seen a few times, Tomoki apparently has the ability to shoot a powerful lightning from his genitals (usually in the manga rather than the anime), also, Tomoki seems to be completely impervious and stoic to any kind of damage aimed to his genitals (This is shown in Forte's Chapter 1 Opening and the Chapter itself, as in both cases, Tomoki endured Ikaros' Artemis Launcher aimed to his crotch, without him showing signs of suffering or pain). He can use lightning to increase his speed. He has even temporarily took the the power of Buddha accessing the six realms of existence and shaping them to his liking. According to Tomoki, Sohara killed him before in a wrestling match. It was not stated how he came to life. Despite all his showings he has still shown to be inferior when an Angeloid seriously harms him.

The second Movie: Eternal My Master for some reason when Tomoki was getting close to the Synapse he was starting to shine in a green aura, it's mentioned that Tomoki is a unique person from many parallel world. Which could mean that he may be a former angel of the Synapse. In fact chapter 77. Minos called Tomoki a "mongrel" which implies Tomoki life may be a lie. He maybe mixed angel and human. There are also beings Angels created other than angeloids and humans. This is also probably the reason when The Rule was active all humans were erased from existence to create a new world in the timeline with Sugata wish and Tomoki was unaffected.

Tomoki (Tomoko) is showing Nymph the meaning of "cute". 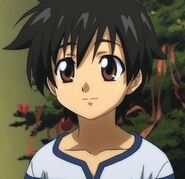