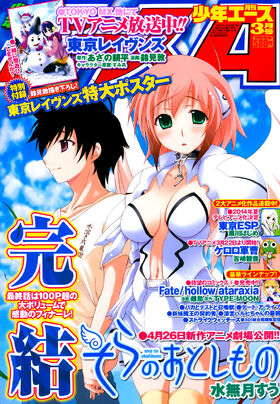 Heaven's Lost Property (そらのおとしもの, sora no otoshimono, lit. "The Sky's Lost Property"), is a Japanese manga series written and illustrated by Suu Minazuki. The plot revolves around Tomoki Sakurai, a highly perverted high school teenager, who desires to live a peaceful life, but encounters a girl who fell from the sky with wings named Ikaros, who becomes his servant.

Sora no Otoshimono began its monthly serialization in the May 2007 issue of manga magazine Shōnen Ace and concluded with the March 2014 issue. The first tankōbon was released by Kadokawa Shoten on September 26, 2007, with a total of 20 volumes released as of March 26, 2014. An anime adaptation produced by AIC aired in Japan in 2009,[1] followed with a second season, a feature film, and two video games.[2] A second film was released in Japan on April 26, 2014.[3] The anime is licensed in North America by Funimation Entertainment.

The kick-off chapter of the Official Sora no Otoshimono spin-off 4 panel manga. The story revolves around the three Angeloids, Astrea, Ikaros, & Nymph and how they go about their not so ordinary life on earth.