Sora no Otoshimono Final: Eternal My Master was released in Japanese theaters on April 26, 2014. Advance tickets were able to be purchased at the price of 1,100 yen.

Kadokawa has posted a trailer for the second movie called Sora no Otoshimono Final: Eternal My Master and was released this year. In the trailer, you can hear the song "Always Smiling" played by Blue Drops (Hitomi Yoshida and Saori Hayami).

The trailer begins by presenting the story that will continue the "hit anime". Ikaros is the narrator and says that since she was picked up by her master, everyday, minute, and second have been pure bliss. All seems well until suddenly the angel imprinting of Ikaros disappears. The trailer than goes on to have a more gloomy atmosphere. Many of the scenes in the trailer have resemblances to chapter 45 and 76 in the manga. In one scene that is similar to a part in chapter 45, Ikaros cries and asks why she was created to Tomoki, and shouts: "This power... I do not need it at all." At the end of trailer you can see a final scene in which Ikaros asks Tomoki to become her master once again. The cast of the series reprise their roles for the movie. Hisashi Saito returned to direct the film under Production IMS. The animation producer Jiyu Ogi was responsible for writing the script under the supervision of the scriptwriter of the series, Yuuko Kakihara. Yoshihiro Watanabe designed the characters.

"Wraps up the story of Tomoki Sakurai and his relationship with Ikaros".

Eternal my Master main plot focuses on the chapter 45 from manga (the Original version).

Note: The the beginning and ending scenes set on the fist pages of the chapter 77 of the manga, thus this make them filler scene for the movie; yet unrelated with the mainplot of the movie. The Second movie became confusing and depressing because of it.

The scene opens with the Zeus' destruction above Synapse while Tomoki calls for Nymph to return immediately; unfortunately Ikaros responds that Nymph isn't coming. Tomoki commands Ikaros to take him straight to Synapse as the Earth's surface deliberately vanishes. While flying towards Synapse, Ikaros tells Tomoki a story how long ago due to malfunction she was once ordered by a "boy" to attack Synapse out of desperation. Remarking a dying Sugata, Ikaros' body begins burning away because of a device installed within her whenever she approaches Synapse without permission. Having second thoughts, Tomoki orders Ikaros to go back but cannot since there is nowhere else to go to.

The Story starts when Tomoki wakes up by Ikaros who attempted to kiss him. Tomoki has a rough morning when Nymph invites him on a date, with Astraea and Chaos joining in. Then meets up with Sohara as Chaos questions what a 'date' is. Meanwhile, Hiyori visits Ikaros to see how well she's cultivating watermelons, and then Sugata and Mikako come over to interrogate the existence of Synapse or about Hiyori's return. Though Ikaros defies anything regarding Synapse, Hiyori reveals the reason of her return was due to Tomoki's unique existence in the particular world they are living in now. Sugata concludes the world continum is all connected to Synapse.

As everyone comes home, Tomoki wonders why Ikaros doesn't show emotions and assumes it because of the imprinting chain. Nymph and Astraea get into a sister fight. Tomoki is getting tired of the troublesome routine and tries to kick them out but they shout his own words back at him that Angeloids are freeloaders. Tomoki then breaks Ikaros' imprinting, with Daedalus and Sohara muttering their dismayed. Tomoki's day becomes even rougher as everyone are condescending him. Mikako takes Ikaros to her household for the time-being as to aggravate Tomoki.

Worried that Ikaros is now in Mikako's care and Tomoki still being stubborn, Sohara, Nymph, and Astraea, dredge Tomoki's room for a restoration card. Scanning, they found one in Tomoki's pants, which activates it sending them to a dimension on a train in a blizzard with Tomoki's grandfather there. In order to return home, they have to oblige at whenever station they get off at. Passing by stations for a chance to date or kiss Tomoki, things get worse as the farther stations become more ecchi. Sohara, Nymph, and Astraea jump out of the train, but find themselves in a freezing cabin as the last stop, where they are force to warm up naked with Tomoki. After beating Tomoki; Sohara, Nymph and Astraea discuss Tomoki relationship with Ikaros, assuming that Tomoki is chose Ikaros rather than any of the three of them and yet he doesn't notice it.

Meanwhile, back in the real world, Mikako scans Ikaros' memory (implying that Mikako was an Angeloid) and does something strange to her. The next day, the girls try to make breakfast for Tomoki however their quality doesn't meet any standard. Then Ikaros crashes in picking up Tomoki in a bold manner saying she won't hand over him to anyone. The girls confront Mikako for what she did to Ikaros, while the latter merely tells them that she gave Ikaros a "Love charm".

Flying in the air, Ikaros recklessly drops Tomoki in a restaurant on his command as their date. Proposing they should go somewhere with just the two of them, Ikaros chases after Tomoki begging him to be her master again. Arriving at the sakura tree, Tomoki reminisces anything that happened since he met Ikaros; thus acknowlegdes Ikaros as his family. Then Everyone show up lecturing him that he needs to think deeply how Ikaros feels and what she wants but Tomoki doesn't listen to them. Mikako then "orders" Ikaros to throw Tomoki somewhere high up, as a way of to provoke their feelings for each other.

At first Ikaros repeatedly throw Tomoki from the sky as a way to make him become her master once more; but failed. Screaming out of despair for the purpose she was created for; Ikaros expresses her denial to kill anymore (in the past she nearly destroyed everything both Synapse and Earth) and with no other place to go to, Ikaros tearfully begs Tomoki to be her master as he is all she ever wants and doesn't want to be thrown away. Realizing the suffering he caused to her by his foolishness and Ikaros true feelings for him, Tomoki accepts her feelings by restoring the imprinting chain. Both return to everyone happily.

Daedalus, who has seen the whole situation from the beginning; replies "That's a relief". She becomes surprised that Tomoki and Ikaros got this close relationship; even if the main reason that Daedalus sent Ikaros to him was to help him.

Back to the opening scene, Tomoki begs Ikaros to stop getting any closer to the Synpase, then Ikaros kisses Tomoki just before entering to the Synapse and she confesses her true feeling for Tomoki that she loves him. So once they arrive to the Synapse Ikaros repeats herself "I love you" to Tomoki just before disappearing, ending the film with a shot of the small tree we saw when they first tried entering Tomoki's dream.

A post credit scene opens when a feather of Ikaros touches a dry tree on the Synapse and vanishes.

" The scenes from chapter from 76 and 77 were included as a filler to the manga, Thus the real ending was the moment when Tomoki restored his contract with Ikaros"

Also these scenes from chapter 77 might be unrelated or happened before the main plot (thus, chapter 45 replaces the epilogue chapter of the manga in the anime version).

The main plot follows a different storyline compared to the manga Because some character, details and plot was edited for the closure for the series.

==About the Ending== It was noticed that the ending of Sora no Otoshimono Final: Eternal my Master ended in the first pages of the chapter 77 of the manga, that sets when Ikaros repeated herself saying "I love you"to Tomoki just before turning into dust; which makes an incomplete ending of the story by lacking rest of the chapter 77 and the epilogue chapters (77.1 and 77.2) and as a result for that kind of ending it makes an opening for a 2nd part for Sora no Otoshimono Final which it shall include these details and hints: "The cause of the world being erased"; the chapter 77 including the epilogue chapters (Tomoki being heartbroken by seeing Ikaros vanishing; Tomoki facing Minos; Tomoki using rule to restore everyone; And Tomoki giving his answer after Ikaros kissed him and confessed her true feeling for him "which the ending shall have better results for the relationship Tomoki and Ikaros"); and the hint that shall reveal if Tomoki is truly an angel from the Synapse.

Because of that ending, the rumors of a 2nd part of the movie have been spreading ever since, which means that is possible that Kadokawa studios will make announcement about it's confirmation  by the end of the year or next summer.

Since the Anime took a different route from the manga. The Anime Final Arc is focused on Chapter 45. While the beginning and final scenes from the manga last chapters serve as filler for a dramatic purpose or the timeline could be that these happened before the main story of the movie; making the chapter 45's content a epilogue arc for the story in the anime version. 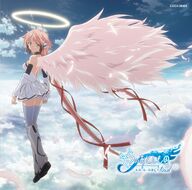 A CD with the tracks from the movie was released, including the new song "Always Smiling" of the trailer, you will find here.

e does not want to be thrown away, and would like to stay by his side forever.

Retrieved from "https://soranootoshimono.fandom.com/wiki/Heaven%27s_Lost_Property_Final:_Eternal_My_Master?oldid=20833"
Community content is available under CC-BY-SA unless otherwise noted.