Sora No Otoshimono Wiki
Register
Don't have an account?
Sign In
Advertisement
in: Characters, Angeloid, Female,
and 2 more

The Harpies (ハーピー,, , Hāpī?) are two Interceptor Angeloid Type γ (Gamma) (要撃用エンジェロイドタイプγ (ガンマ),, , yōgeki-yō enjeroido taipu g (ganma)?) Angeloids and the secondary antagonists of the series (next to the Master of Synapse). They later join Tomoki and his friends on Earth.

They set a trap (using Nymph's friendship with Ikaros to arrange a meeting) in a remote area by the mountains and having Nymph conceal them behind one of her cloaking programs, planning to ambush Ikaros and make a fast return back to Synapse with their payload. When Ikaros responds to Nymph's request for a meeting and arrives at the ambush location, one of the Harpies hits her with the powerful Prometheus cannon, sending a massive bolt of searing energy at the oblivious Ikaros, vaporizing one of her wings and knocking her violently to the ground. Horrified and enraged when she learns their true intentions, Nymph turns on the Harpies and fires her mighty "Paradise Song" energy beam at them in a surprise attack. Unfortunately, this attack only enrages the Harpies (who for the most part escaped the beam with only minor burns and singed feathers). They proceed to brutally beat Nymph and painfully rip both of her wings out of her back. As they gang up on the helpless Nymph, Ikaros begins to awaken from being knocked out by the surprise Prometheus blast, and tries to get to her feet to aid her friend. The downfall of the Harpies begins when Ikaros decides to engage her Uranus Queen mode (to the horror of Nymph, who does not want Tomoki Sakurai to find out about the truth behind Ikaros and her past life).

Tomoki accepts her past and grants her permission to deal with the Harpies, and she activates her Uranus Queen mode. The Harpies fire their Prometheus cannons, but each shot is harmlessly deflected by Ikaro's, nigh invulnerable forcefield, Aegis Shield. Knowing that their fate has all but been sealed, the two Harpies try to escape, but are stopped when Ikaros summons the massive Hephaestus spaceship that unleashes a massive blast of pure energy from it's gigantic cannons that is so powerful, the beam can be seen from space. The force of the energy blast sends the Harpies back to Synapse, where they face the wrath of their master for failing to complete their mission.

Later on in the story, the Harpies make a return when they (on several occasions) unsuccessfully search the different levels of Synapse for Eishiro Sugata, who is there exploring the mysterious world of Synapse hoping to discover the truth of the new world. They fail to locate him most of the time, but on several of his trips to Synapse, they find him, but he escapes via the portal that Nymph's device opens between Earth and Synapse before they can capture him. It is only when Eishiro runs past them and meets the awakening Hiyori Kazane inside of the domed complex in Synapse that the Harpies (along with the Man of Synapse) capture him, but since he will soon forget everything about his current adventure due to the death of Hiyori's human avatar on Earth, they allows him to escape when their master allows it. They both stay up in Synapse by their master's side, helping him in his plans for the creation of a new generation of Angeloids and other side tasks that he needs performed. Due to their failure on Earth when they faced Ikaros, they are not allowed to leave Synapse for the time being.

After several attempts of the Master of Synapse to achieve his goal on the surface, he sends the Harpies directly down there to assassinate the Uranus Queen in his frustration, knowing they stand no chance against the evolved Ikaros. They are driven to the decision not to try and kill him by the inhabitants of earth and instead buy clothes and try out other fun activities like going to a beach. On the beach, the older sister seems to be extremely unwilling to let her belly button be shown, which encourages Tomoki and her younger sister to try several attacks on her to show this, ending in an almost-eyeless to both. At the end of their visit to the beach, they notice that the money had sneaked away quietly and had to work with the others to pay off the bill. The younger one then sets up a trap for her by telling Nymph that her sister would have planned to escape, making Nymph deactivate all of her systems, followed by offering food to Astraea in order to let her sister be punched into a desert together with Tomoki. In the need of water to keep the weak human body of him alive, she seems to be growing a sympathy o him, like her younger sister had planned. At the fireworks festival as on the beach, the younger one seemingly enjoys herself, while the older one continues to doubt due to her Master obviously being unable to do so. As the fireworks start however, the older decides to let herself be happy and as asked again if they wanted to stay at Tomoki's like the others, she answered in the affirmative. Her sister then goes with Ikaros to get drinks, as she says, however taking the Uranus Queen to a place away far enough so she could pick a fight with her without the others noticing, for the sake of her sister being able to continue a happy life on earth. She comments that she couldn't allow them both to go against their Master's orders, and is totally aware of the fact she can never beat her target. Seeking a chance to hurt Ikaros, she doesn't notice how her ammunition is quickly fading away and is counterattacked by her while reloading. This counterattack, however, is suddenly stopped by a Prometheus projectile fired by the first Harpy. They both make clear that they wish each other to live a happy life on earth, but neither of them would let down the other one or their Master, so they take on Ikaros. They reveal to her that they both wore an upgraded version of the necklace bomb, capable of reaching the strength of a Melan Ikaros' Apollon arrow, however Ikaros is sure she couldn't be hurt by that in any way (though losing a piece of her armor to the Prometheus shot). They activate the bomb's system without detonating it immediately, first talking about how nobody could understand the suffering of their Master, who has to stay awake into all eternity while everybody else has the option to rest and dream. In the moments when the other humans appear to convince the Harpies to stop their useless self-destruction, the older one comments that he shouldn't make the farewell more sad and the bomb activates. The Aegis Shield of the Uranus Queen is used around them to prevent collateral damage.(continuing efforts) 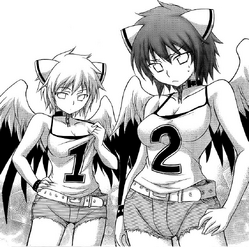 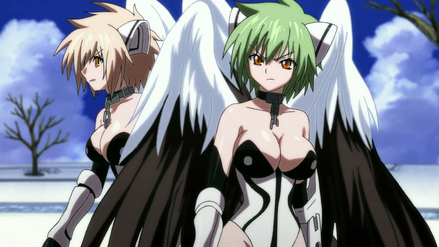 Harpies guarding and looking for Sugata 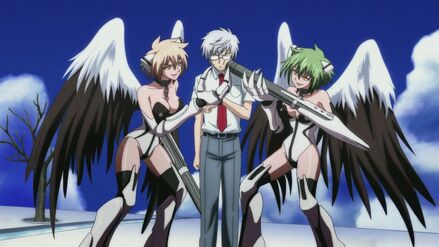 Harpies caught Sugata and plan to kill him. 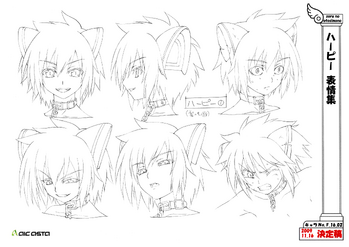 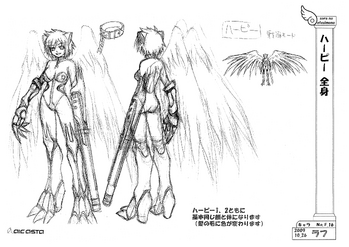 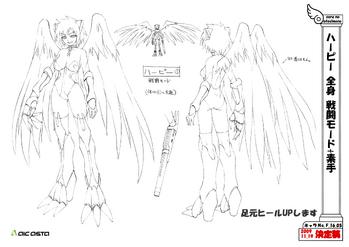 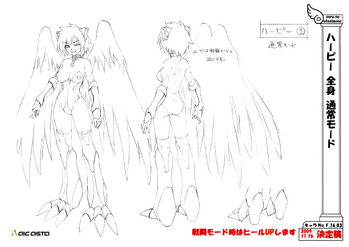