Tomoki Sakurai is a lad who lives in the quaint little town of Sorami. Life is quiet so Tomoki gets his kicks by being a peeping tom who has a number of prime viewing areas that he has mapped around town. Tomoki would be content to live this way forever, but one night a strange event changes his life forever. While watching the sky and waiting for two friends, from above an object falls from the heavens which turns out to be a female being known as an Angeloid. Her name is Ikaros and she sports a shock of pink hair, angel wings, and a large bosom. Ikaros bonds with Tomoki and takes him on a radical change of life experiences. The PSP game plies the interactive adventure trade which features a new story based on the animated source material. The dialogue is accompanied by speech for added ambiance. At the outset of the adventure, the somewhat mechanical song of the cicada signals the approach of summer. Once the warm weather arrives, the citizenry of Sorami visit hot springs, the beach, parks, and other locations that are amenable to lazy day lounging and sloth. It is within this backdrop that the cast of the PSP game interact, utilize card magic, and effect changes in the Angeloids that populate the adventure. 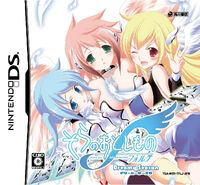 The game mostly consists of typical visual novel/dating simulator game-play in which the main character, Tomoki, visits and talks to his friends, and you decide which dialogue option to choose next in order to further various game options. Once in a while, you get to pleasure one of the girls, where you use the DS Stylus Pen to tap and rub on different body parts. The longer it takes, the lower your achieved score. For example, if it only takes 1-19 seconds, you get an S. But if it takes maybe 60 seconds, you get a D or C.

The game's RPG/dating sim-esque elements include various RPG elements, such as earning money and upgrading your character's stats. Money is earned through the various pleasuring-games encountered. Money is spent on sorts of training activities.

The game has 6 chapters. After you've beaten it, you are able to skip past already-read dialogue.

Retrieved from "https://soranootoshimono.fandom.com/wiki/Games?oldid=19859"
Community content is available under CC-BY-SA unless otherwise noted.