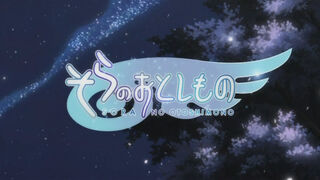 Heaven's Lost Property or Sora no Otoshimono is a 2009 TV anime series based on the manga of the same name by Suu Minazuki, serialized in Kadokawa Shoten's manga magazine Shōnen Ace. The story revolves around Tomoki Sakurai, a teenage boy struggling for a life of peace and quiet. His already-ruined life worsens when he encounters a U.M.A, ('Unidentified Mysterious Animal) named Ikaros, an Angeloid who fell from the sky, and later encounters other Angeloids as the series progresses. The anime follows up to the Harpies arc of the manga, with subtle changes to the story's plot.

The show is directed by Hisashi Saitō, written by Yūko Kakihara, and the music is done by Motoyoshi Iwasaki.

The opening theme for the first season is "Ring My Bell" by Blue Drops, consisting of singers Hitomi Yoshida and Ikaros's voice actress Saori Hayami, while multiple ending themes were used for each episode aired. For the second season, the opening theme for episode 1 is a cover of "Ring My Bell" sung by Soichiro Hoshi, while the opening theme from episode 2 onwards is "Heart no Kakuritsu" (ハートの確率, Hāto no Kakuritsu, "Probabilities of the Heart") by Blue Drops. Multiple ending themes were also used for each episode, as it did with the first season.

The Opening and Ending songs are here.

Retrieved from "https://soranootoshimono.fandom.com/wiki/Anime?oldid=21356"
Community content is available under CC-BY-SA unless otherwise noted.