Start a Wiki
The Angeloids (a portmanteau of Angel and Android) are a series of hybrid machines made ​​by Daedalus and Minos. They were created to obey the orders given to them by the masters of Synapse.

The actual process is unknown but Angeloids are given life from biological engineering since they have organs, fluids, etc. What is known is that, despite their fragile appearance and human characteristics, they are endowed with great strength, speed, and knowledge of battle as well as being extremely difficult to harm by human measures.

Angeloids are made in several different types as powerful warriors, medical technicians, and strategists, each of which is specially made for a certain task that is primarily (but not uniquely) combat-related.

The Angeloids were created based on the needs of those who inhabit Synapse; every generation, new power levels and abilities were given to them.

The result of the only known established partnership between Daedalus and Minos; his weapon systems are what make them the most powerful generation. The first generation's capabilities were determined by a mixture of three basic attributes: combat capability, emotional control and processing capability.

Ikaros is the great ace of the heavens, the "Uranus Queen;" her specialties and capabilities went beyond any battle machine ever seen, but her emotions are almost nonexistent. Pity against her enemies is nothing more than a dream. 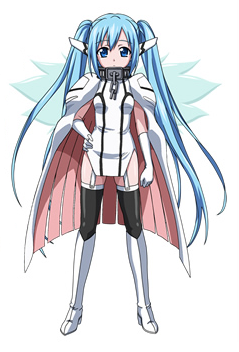 Nymph is an Angeloid oriented for electronic warfare skills and her ability to hack can make all the difference on the battlefield. 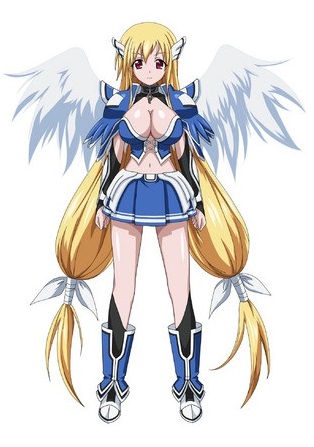 Astraea is a weapon of war of Synapse. Her skills according to Nymph exceed even those of Ikaros. With her low processing capability she tends to commit stupid mistakes and most of the time acts like a child; but when she gets serious she can demonstrate her full potential. She is focused on only melee-combat and is never shown to be able to beat Ikaros in combat.

The second generation was developed by Minos alone, in an attempt to totally destroy the first generation (except for the Harpies). New skills have been added, as well as new specialties.

Chaos is the first Angeloid of the second generation. Her ability to use the self-evolution system PANDORA by far exceeds that of any other Angeloids, who have at least a barrier in programming laying over it, and she can use it not only to have feelings or self-evolve in extreme situations, but also to take in matter like fish or Angeloids to evolve quickly. Maybe as a result of this and missing education about normal life, she tends to act extremely childish and sometimes insane. Her concept in abilities focuses on illusions and using her blade-like wings. 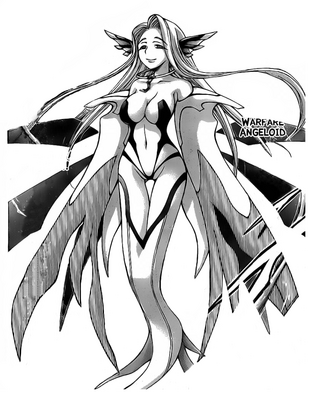 Made for combat underwater, Seiren was the promise of defeating Ikaros in the sea, since Angeloids except for Chaos, who uses amphibian-type wings, can not swim.  Her body is like that of a marine mythological creature, the Seiren, as her name implies. Not much is known about her combat abilities aside from fighting underwater.

Made from the shapes of the first generation, the Melan were created by Minos to kill Tomoki, they had a mass creation. Unlike the originals, they all have hair, clothes, and abilities in dark colors. They use a type of energy core different to the first generation's, as stated by Minos, their cores haven't grown slowly, but were made in short time. In comparison, they can carry or generate more energy, but are unstable. No single Melan ever shows a sign of emotions, implying that they might not use the PANDORA system as it wasn't worth to use it in unstable weapons. 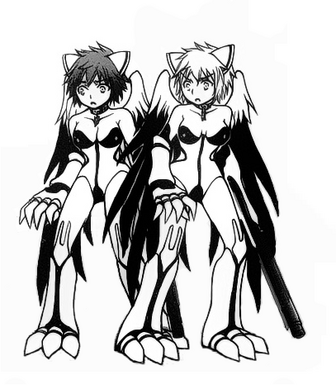 The Harpies where designed as two sisters, most likely twins, even if one of them refers to the other with "older sister". They are capable of exacting many different tasks of battle including melee combat, target sniping, barrage fire, or ambushes and seem to be the midway between the specialized classes. During the events of Sora no Otoshimono, they mostly serve as the guards and assassins of the Master of Synapse. 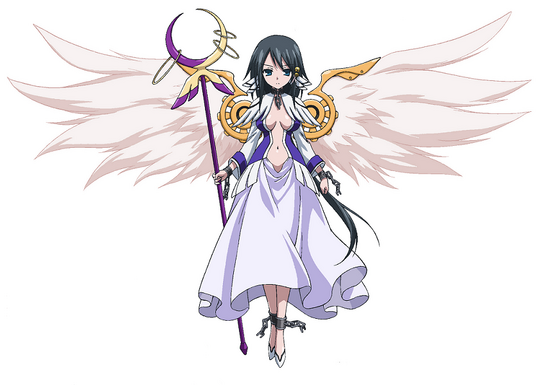 Hiyori was an angel and incubated within Synapse, however her digital form appeared on earth along with Tomoki and the others, after her "death" she was converted to an Angeloid and sent back to earth under the control of Minos. 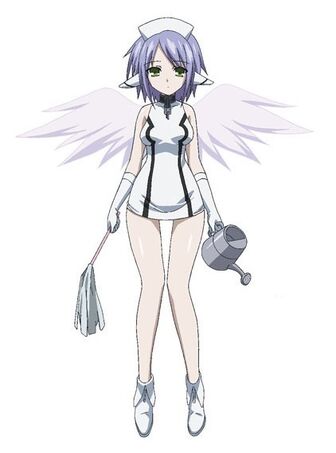 Made to take care of the cities that surround the Synapse, they were produced on a large scale, with surgery and healing skills, as well as household chores like cleaning and fruit picking.

Occasionally, Angeloids appear together with Minos, seated on his throne, it seems, they do the work of concubines, the Sora No Otoshimono Wikia members do not know their type nor their names.

Imprinting is the process by which an Angeloid, acknowledge and establish a person as their master. Angeloids seen thus far, imprint on their masters by means of a chain wrapped around the master's hand connected to a collar around the Angeloid's neck, symbolizing the master-servant relationship. Angeloids that have not imprinted on a person and thus, have no master, wear collars, but retain only a small segment of chain. The process of imprinting involves the materialization of the chain around the master's hand, thus forming the bond between master and Angeloid. The chain can be extended to as long a length as is needed or the chain can also be rendered intangible save for the small segment of chain attached to the Angeloid's collar for the sake of convenience. It is unknown whether the remaining segment of chain can be rendered intangible as well, as all three first-generation Angeloids retain small segments of chain attached to their collars.

Transport Cards are cards that allow its user to grant wishes through the synapse. The newest model can grant almost any wish without disappearing. The older models can only grant one wish per card. Tomoki always uses them to do something perverse, but Sohara always ends up confiscating the cards, although Tomoki still manages to somehow acquire some of them, often through unusual means. Sugata often conducts research on these cards.

The Dive Game is a device which enables others to revisit dreams. It is mentioned that Angeloids are prohibited from entering as dreams are taboo for them. Tomoki's dream is connected to the Synapse so when entering it through the Dive Game it would be real and anything you bring back would not disappear, unlike what Nymph states that you couldn't bring anything back from a dream since it belongs there and it would stay there.

Can be used to control many different things. For example, Ikaros uses it on episode 10 in Sora No Otoshimono : Forte to control various "features" she added to Tomoki's house.

Makes any amount of money appear by typing the desired amount.

It has not yet been used at all since the time Ikaros gave Tomoki 100 Billion yen.

This device turns anyone into anything else...LIKE A TREE. Tomoki's main usage of this involves turning himself into his female counterpart, Tomoko.

Retrieved from "https://soranootoshimono.fandom.com/wiki/Angeloid?oldid=20783"
Community content is available under CC-BY-SA unless otherwise noted.